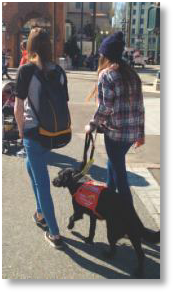 Alice qualified in December. Alice has had a positive impact on Claudia, not only in her ability to help regulate her blood sugars but has really helped Claudia's confidence. Claudia was a reserved girl and Alice has brought her out of herself and really helped her grow in all aspects of her life. They are a very connected partnership and have become attached to each other making the bond special which means Alice is alerting amazingly well.

ALICE successfully completed her ‘scent’ training last week so will be moving on to the client this week so we are really hoping that, like Barton, she will settle with her new family and enjoy working with the young girl and helping her lead a more normal life.  We met Alice several times at the Centre when she was with her trainer and she was obviously pleased to see us, but also very happy in her new role.

She left us on January 21st and joined her new family on February 23rd.

ALICE has, like Barton, become a well loved member of the Garden Centre.  Since my last update on her she has really lost weight and now has a really good figure, although she keeps telling everyone that she is underweight!  Her behaviour is now up to standard, though like Barton, her recall is good but a little slow sometimes.  She has now been matched with a young girl with Diabetes, and will being going to stay with her family for a few days at the end of this week.  All being well we will then have the final scent training to do before she moves on, possibly in the New Year.  We shall await the results of her family stay but as she is such a gentle, loving , and fun loving dog we have high hopes that she will soon be a working dog. 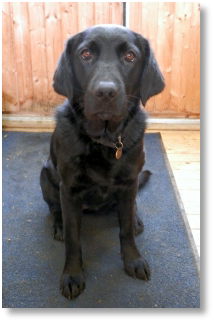 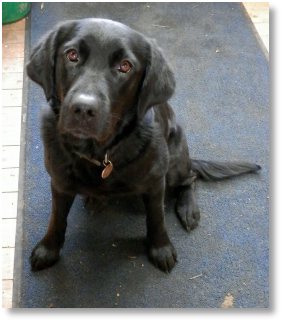 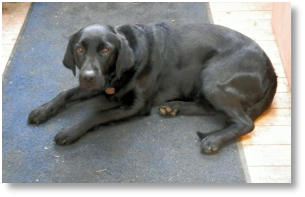 And now to Alice!

We were 'dogless' for about a week when we received a call from the Centre asking if we could look after Alice for possibly about six weeks, getting her behaviour level back to the high standard needed and to get her weight down.  Alice had gone through all her training, had been matched and joined her family, but with a new baby in the family and they could not cope with new baby and dog, so after three months of trying they reluctantly had to admit defeat with the dog.  So here at the Garden Centre Alice is making her mark.

She has a totally different character to Barton, not so energetic, a gentler nature and very lovable.  She is a cross Labrador and Retriever, so has a slightly curly coat, black and shinny, long floppy ears and the same beautiful expressive dark brown eyes that Barton has.  She is shorter than Barton but weighs the same, so we have got to get her weight down by about 2 kg.  After two weeks of 'dieting' and lots of exercise her figure is definitely improving but they wanted to check she was not losing weight too fast so I took her in to the vet to check her weight - it is still exactly the same weight as when she arrived, but as I believe muscle weighs more than fat we hope that is the reason!

Barton came in to the Garden Centre and seemed really pleased to see his old stomping ground and all the staff, but what I found really interesting that when we introduced him to Alice and the two dogs seemed instantly attracted to each other, enjoying a run and chase round the nursery field then playing together in the office.  I wish I had taken a photo of the two together, but maybe I shall get the chance before Barton moves on to his next new home and family.

Working with these dogs is a great pleasure and I would thoroughly recommend anyone who has some time, patience and loves dogs to consider becoming a socialiser for Medical Detection Dogs - the work these dogs do is remarkable and it is amazing to see them working, they appear to be really enjoying life and they make such a difference to those who are born with diabetes. 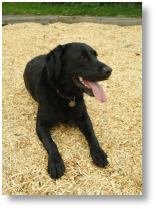 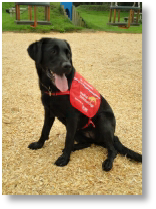 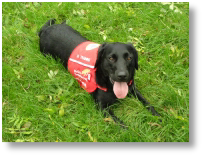